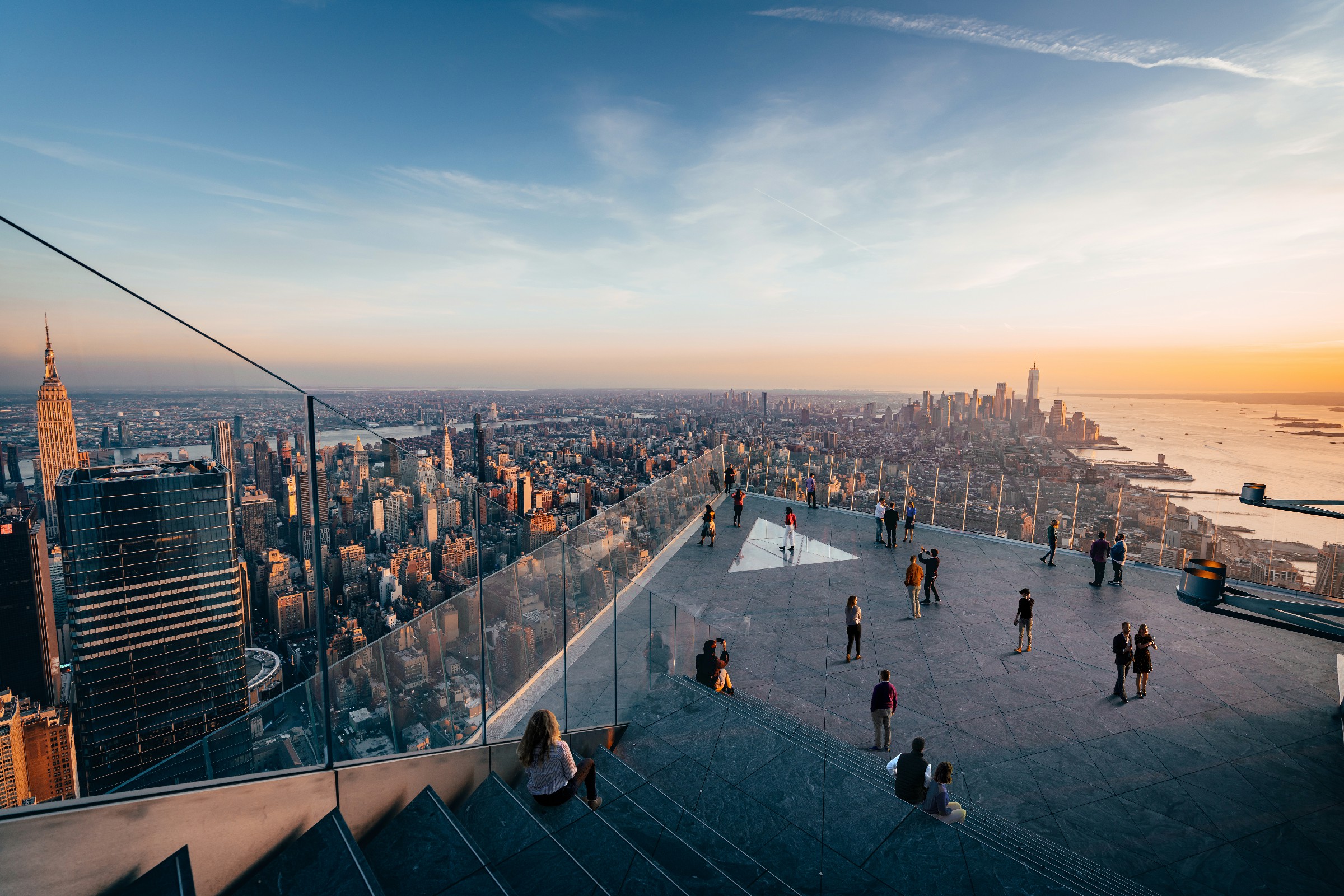 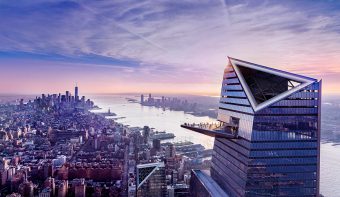 Hudson Yards also announced today a program offering New York City public school groups free visits to Edge and Vessel every Tuesday. The program kicked-off today with fifth grade students from neighboring elementary school P.S. 33 in Chelsea getting a sneak peak of the entire experience prior to the first ticketed guests. NYC Public School bookings can be made online at www.edgenyc.com/group-bookings

“The overwhelming public response to Hudson Yards over the past year – making us part of everything from their morning coffee run to a place to celebrate special occasions – has been incredibly humbling. With the opening Edge, one of the final pieces of the first phase of Hudson Yards, it was important to us to extend an invitation not only to the world to experience our great city from new heights, but also to New Yorkers who have made us part of the City’s cultural fabric. We are proud to ensure Edge is accessible to New York Public School students which we hope will inspire the next generation of New Yorkers to fall even more in love with this great city,” said Stephen Ross, Chairman of Related Companies.

“Our goal at Oxford is to connect people to exceptional places, and Edge is another incredible attraction that Hudson Yards has to offer New Yorkers and visitors from across the globe. It’s truly one of the best views of one of the best cities in the world, and we’re excited for everyone to experience it first hand,” added Michael Turner, President of Oxford Properties. 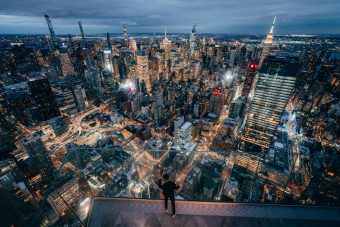 A bar, located on the 100th floor, offers a glass of champagne or signature cocktail and light bites to enjoy indoors or outdoors on the sky deck. Situated one floor above Edge, on the 101st floor, is Peak a stunning restaurant, bar, and event space operated by hospitality group RHC.

Designed by Kohn Pedersen Fox Associates (KPF) and extending out 80 feet from the 100th floor of 30 Hudson Yards, Edge redefines the New York skyline. Its monumental triangular form completes the tower’s architectural dialogue with the city. A marvel of modern engineering and structural design, the 765,000-pound observation deck is comprised of 15 sections, each weighing between 35,000 and 100,000 pounds, bolted together and anchored to the east and south sides of the building. The 7,500-square-foot outdoor viewing area is surrounded by 79 glass panels, each weighing 1,400 pounds, manufactured in Germany and finished in Italy. Interiors of Edge and Peak were designed by Rockwell Group while the ‘Journey to Edge’ was created by the firm’s experience design studio, LAB at Rockwell Group.

“The Edge observation deck is the most dramatic in a series of gestures which link KPF’s buildings, in the Hudson Yards development, to the principal surrounding structures of the city,” said William Pedersen, KPF Founding and Design Principal. “Gesturing directly towards the Empire State Building, and higher than its observation deck, Edge pays homage to its role as the most emblematic of all New York buildings.” 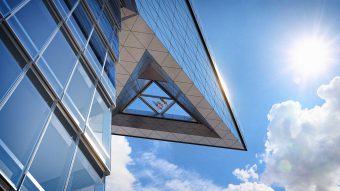 “We see Edge as a unique opportunity to experience New York City,” said Marianne Kwok, Design Director, KPF. “With features that complement the design of 30 Hudson Yards, Edge is the result of an immense team effort, and its construction process was unprecedented. Now that it’s finished, I look forward to seeing it used and enjoyed by thousands of New Yorkers and visitors alike.”

“We are thrilled to be a part of this incredible project. Edge takes visitors on an experiential journey starting from the dedicated queuing area, all the way up to the breathtaking reveal of the 360-degree city view,” said Melissa Hoffman, Principal and Studio Leader, LAB at Rockwell Group.

Edge is now open seven days a week year-round from 8:00 AM to midnight. General admission adult tickets are $36 purchased online and $38 purchased on-site. Child tickets are $31 purchased online and $33 on-site. New York City residents can buy adult tickets online for $34. Special rates available for seniors, active and retired members of the U.S. military and groups. Tickets to Edge are available now at http://www.edgenyc.com 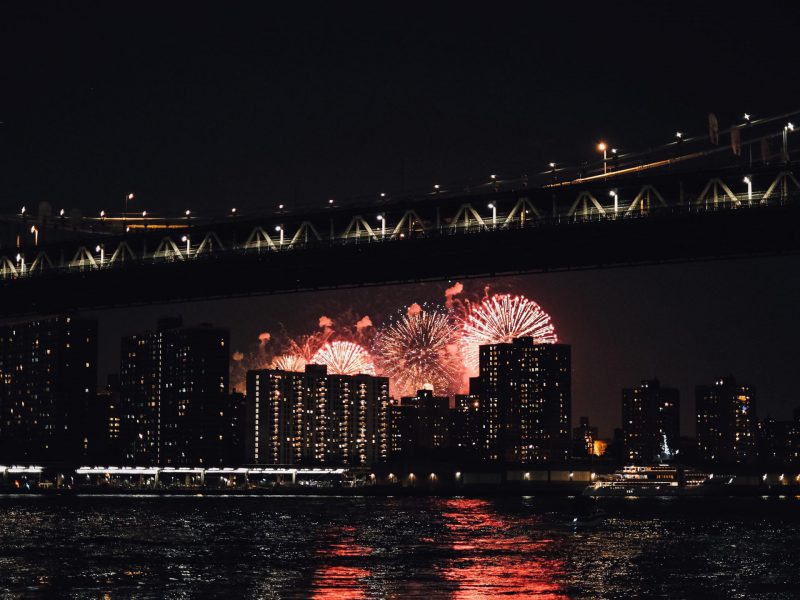 From the iconic Macy’s Thanksgiving Day Parade—which officially kicks off the holiday season—to the Christmas Tree Lighting at Rockefeller Center and the New Year’s Eve ball drop in Times Square, New York City offers unparalleled experiences for visitors and locals alike. NYC hosts classic and surprising ways to celebrate the holidays with vibrant performances, tours, lightings and more taking place from early November into January. These include the awe-inspiring window displays at stores such as Saks Fifth Avenue, Macy’s Herald Square and the new Nordstrom Women’s Store, and the return of the NYC Winter Lantern Festival in Staten. Following are 25 things to see and do across the boroughs this holiday season in New York City.  Radio City Christmas Spectacular Starring the Rockettes  November 8–January 5 Midtown, Manhattan  The Christmas Spectacular Starring the Radio City Rockettes returns to Radio City Music Hall, dazzling audiences of all ages. The production sparkles with incredible costumes, festive songs and the iconic synchronized high kicks.  The Origami Holiday Tree at the American Museum of Natural  History November 25–January 12 Upper West Side, Manhattan  One of New York’s beloved traditions includes a 13-foot tree and 1,000 origami models. Hosted at the American Museum of Natural History, the  signature Origami Holiday Tree has been an annual tradition for over 40 years. Volunteers, including local, national and international origami artists, fold year-round. Each year, the tree features a different theme relating to special exhibitions or collections at the museum.  NYC Winter Lantern Festival November 20–January 12 Randall Manor, Staten Island  The NYC Winter Lantern Festival is returning for a second year to Staten Island. Sponsored by Empire Outlets and venue partner Snug Harbor Cultural Center & Botanical Garden, eight acres at Snug Harbor will be lit up by more than 50 LED installations. The LED lanterns will be accompanied by live performances of traditional Chinese dance and art.  Holiday Lights at the Bronx Zoo  November 21–January 5 Fordham, the Bronx  Returning for the first time since 2007, the stunning light displays at the Bronx Zoo will cover several acres in a walk-through experience with wildlife-themed LED displays, custom Asian lanterns and animated light shows on Astor Court. Entertainment will include holiday-themed music, performances, ice carving, train rides, seasonal treats and souvenirs.  New York Botanical Garden Holiday Train Show  November 23–January 26 Fordham, the Bronx  Head to the New York Botanical Garden to be enchanted by model trains zipping through a display of more than 175 New York landmarks, each re-created with bark, leaves and other natural materials. The New York Botanical Garden is conveniently accessible via the Metro-North Railroad from Grand Central Terminal.  Gingerbread Lane at New York Hall of Science  November 23–January 13 Flushing Meadows Corona Park, Queens  Holding the record for the largest gingerbread village, Gingerbread Lane at the New York Hall of Science is back and more edible than ever. Visitors are invited to witness the vast collection of gingerbread structures which are embellished with candy canes, chocolate and frosting.  Macy’s Thanksgiving Parade  November 28 Manhattan  The Macy’s Thanksgiving Day Parade is