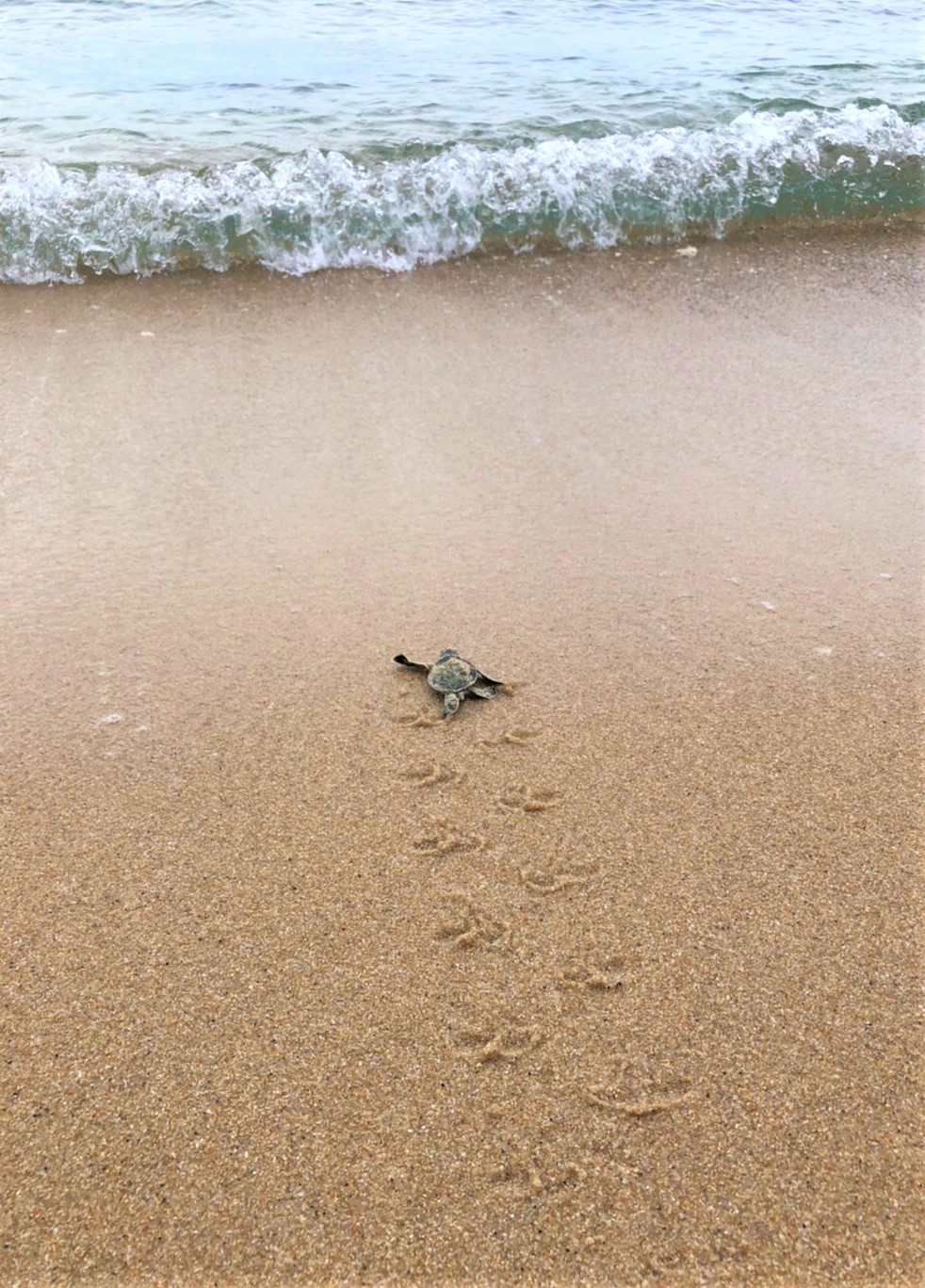 In the course of the lockdown due to the spread of coronavirus, nature gets a chance to take some rest and revive itself. Creatures that are scarcely seen during normal days make a heart-warming return, including turtles.

At Koh Samui, some turtle mothers has laid eggs on the shore during the quiet time. With attentive help from environmentalist beachfront resorts, the newborns are safe from nest to nest, and there could possibly be more baby turtles hatching here in the future. It is completely wonderful to be able to witness the birth of such endangered animals. 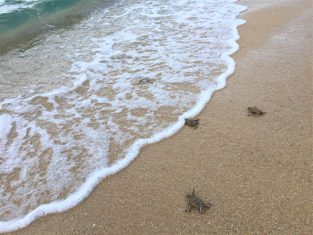 During the past few months, some 200 green turtles (Chelonia mydas) has been born on the secluded beach at Banyan Tree Samui resort, under watchful protection of the hotel’s resident marine biologist, Thepsuda Loyjiw and her team. Since a giant mother turtle laid the eggs in late February and early March, they’ve matured in the protective custody of Loyjiw’s team and the local Department of Marine and Coastal Resources.

Luckily, these babies survived from natural predators in this protected area thanks to the 5-star hotel’s professional sustainability team. Recently, Banyan Tree Samui was recognised by EarthCheck as meeting the highest standards  for environmentalism in the country.

Earlier this month, 87 endangered turtle eggs were discovered on the strech of beach at Silavadee Pool Spa Resort. Back in 2012, the resort had found turtle eggs and has become their home since then, where the mother turtle regularly returned every two years. Having been working closely with Marine and Coastal Resources Research Center of Chumphon province, the resort’s team has obtain good knowledge on how to look after the turtle nest. 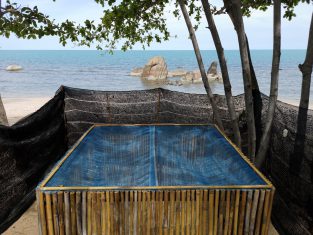 The most recent nest has been kept safe with an enclosure to protect the eggs from potential predators, for the eggs to hatch naturally in the next 50-6- days, and letting the baby turtles returning to the sea, their true home, straight away.

The return of the endangered mother turtle every two years may indicate this luxury resort’s successful “back to nature” concept and practices. 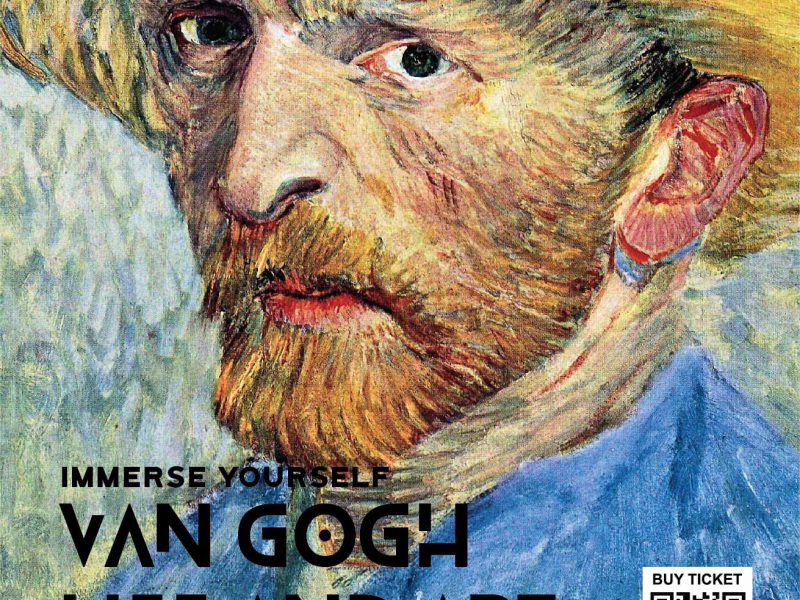 “Van Gogh. Life and Art” at the Museum of Digital Art Bangkok

In the 19th century, Vincent Van Gogh created 930 paintings, 1,100 drawing and sketches without gaining recognition for his artistic geniusness throughout his life time. The life of the influential post-impressionist painter has came into the world's spotlight after his passing, and he has been recognised as one of the most respected prodigies since then. His works signify his melancholic emotional and spiritual conditions, developed by the life he had lead, which is filled with suffering, yet they look somewhat romantic in one-off ways. The interactive multimedia "Van Gogh. Life and Art" at the Museum of Digital Art Bangkok (MODA) presents an immersive experience of investigating arts with huge screens to enable you to appreciate the dramatic strokes for which Van Gogh is famous in great details. The exhibition also contains Van Gogh epistolary oeuvre (letters from the artist): quotes about his life and paintings from letters to his brother Theo. For the first time in Bangkok, “Van Gogh. Life and Art” features more than 300 paintings within a 40-minute extraordinary session. The exhibition opens 4 June until 31 December at MODA Gallery, 2nd floor River City Bangkok. Tickets are on sale here. Stay updated on Facebook or www.rivercitybangkok.com 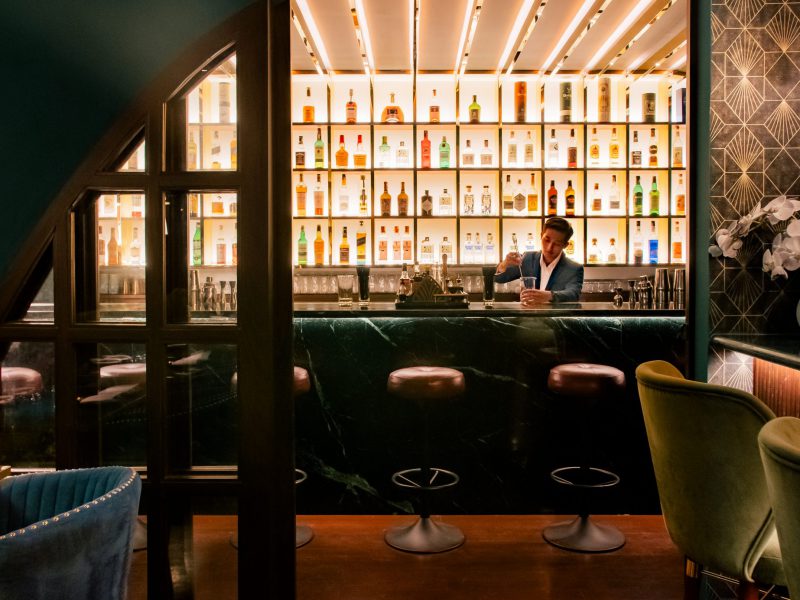 As restrictions ease, Mia Restaurant, Bangkok, is now ready to welcome you back with tempting offers and new experiences.   Rooms On the second floor, Rooms is a stylish dining space offering a seasonal 8-course tasting menu creatively curated by where Chef Top and Chef Michelle, drawing inspiration from their formal training in Michelin-starred restaurants in Europe and Asia, as well as their Thai and Malaysian upbringings. Highlights from the new menu include Pea Tartlette with Smoked Curd and Finger Lime, and Foie Gras Biscuit with Dark Chocolate and Piquillo Pepper. More playful plates to look forward to are Shiitake Chawanmushi with Fermented Mushroom and Black Truffle; and the 48-Hour Slow-Cooked Short Rib served with a series of beef-based condiments; and Black Sesame Ice Cream served with White Chocolate and Cherries as a sumptuous ending of the dandy day. With Mia’s extensive wine list, comprising more than 115 labels from all over the world, diners can opt for a wine pairing with either four or six glasses of wine.   8-Course Tasting Menu: 2550++ Wine pairing (4 glasses): 1650++ Wine pairing (6 glasses): 2300++   Due to government social distancing regulations and the on-going curfew, Rooms currently offer staggered seating. You can choose between a 6-6.30pm or 7-7.30pm start to your meal.   The Curtain The Curtain is a vibrant bar and eatery where you can sit comfortably with your friends and enjoy Mia's signature tastes like Foie Gras Donut; Hot Smoked Salmon with Ikura Salsa and Potato Velouté; Grilled Pork Chop with Braised Lentils and Chorizo Jam, as well as Mia’s famous Tarte Tatin with Vanilla Ice Cream, along with playfully crafted cocktails. The cocktail bar opens with a new menu featuring eight creative cocktails, including Be a Movie Star with Whiskey, Pineapple Juice, Popcorn Syrup and Angostura Bitter; and Casa del Fumo with Tequila Reposado, Mezcal, Antica Formula, Spiced Coffee Syrup, Chocolate Bitter and All Spice Smoke. Due to government social distancing regulations and the on-going curfew, The Curtain currently offers two seatings, one at 6pm and the second at 8.30pm.   Mia 30 Attha Kawi 1 (Sukhumvit Soi 26) T. +66 (0) 2 258 6745 E. reservation@miarestaurantbkk.com W. www.miarestaurantbkk.com   Open Tuesday to Sunday from 6pm 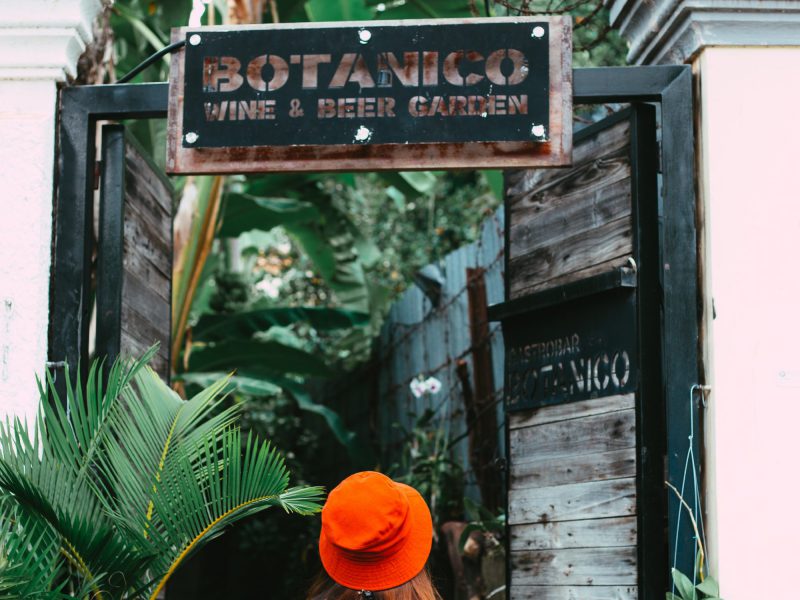 As a fast-growing city, the number of multinational enterprises escalates, so does the number of expatriates from around the world. The more the city flourishes, the more it attracts tourists. Apparently, Phnom Penh is now a multicultural modern town where people can have fine, edible comforts as in other major cities around the world, plus one-of-a-kind charms of authentic Cambodian cuisine.   THE FRENCH INFLUENCE One of the most recognisable features of Phnom Penh city is the trace of Colonial influences intermingling with Cambodian ambience and young skyscrapers. The French influence that lives on from Cambodia’s so-far-gone history is so palpable in Phnom Penh, especially in its dining scene. In Phnom Penh, a multitude of French diners are at hand if you want to try some, and many of them serves authentic French taste. On the Okha Ket Street, Bouchon Wine Bar is a colonial house with homemade French cuisine in the cosiest setting, serving different dishes from day to night. Apart from choices of wines, its home-made Rose Sangria is a must-try. There are a lot more places to have it the French way, but Bouchon Wine Bar is one of the best ones downtown. Another unmissable stop is Brasserie Louis at Rosewood Phnom Penh, where top-notch French tastes and authentic Cambodian dishes are feasted in the midst of marvellous panoramas of Phnom Penh city. Also at Rosewood Phnom Penh, Patisserie is the place to delight in fine pastries and desserts crafted with real French technique.   HAVE IT HEALTHY Vegans and health aficionados are going to love it in Phnom Penh, as the city is bustling with scrumptious vegan-friendly dishes and healthy bowls. To grab some, Eleven One BKK1 is a house in a verdant garden with a myriad of health- and environmentally-friendly choices made from local produces and with zero MSG. Popular is the one-off Amok Burger and Khmer Beef Steak. There is an out-of-the-ordinary alley hidden in the city, and it is the Street 240 ½. The alley is home to artsy venues and fascinating street art, as well as the fantastic ARTillery Café. On the menu for this easy-going café are creative healthy choices, which can be the ideal breakfast to have on a regular basis. Its Poke Bowl fills up the stomach so well and tastes great. Its smoothies and superfood dishes are also worth loving. Aside from the aforementioned spots, vegan and healthy options are available at many restaurants and cafés, so don’t worry about your health plan once you are in Phnom Penh.   DRINK THE DRINKS As previously stated, with the Western influences, wines and cocktails can be commonly found at most restaurants. For the ultimate drinkable experience, recommended is Sora Sky Bar at Rosewood Phnom Penh. Even though it is famous for its unbeatable views from the 37th floor, especially during sunset, its drinks are indeed second to none. With highly-skilled bartenders, whether you want to sip classics, signatures, or tailor-made glasses, you are sure to be elated. Rare whiskies are also its strong suit. In Phnom Penh, with big and microbreweries on site, the