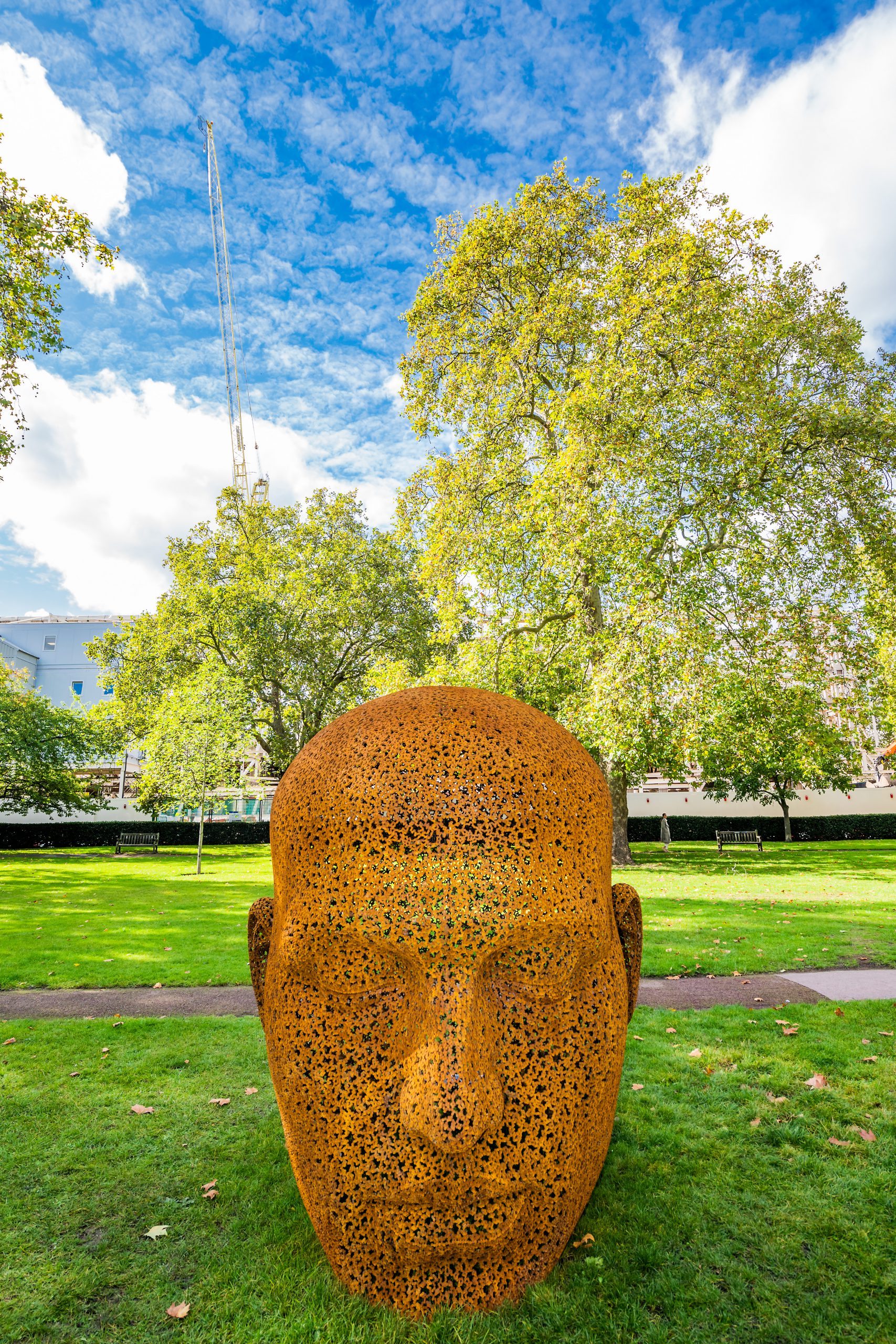 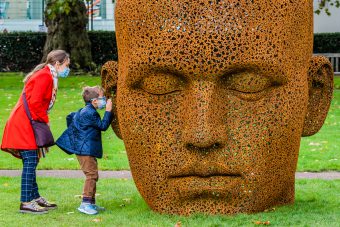 Internationally-acclaimed Seo Young-Deok’s meticulous manipulation of bicycle chains in Meditation 1554 can be found at Grosvenor Square. Each iron piece is welded together to become a part of the dynamic system of interconnectivity exhibited in human forms. While the material may be physically strong, the true strength exhibited is that of the human spirit. The exceptional work by the Korean artist often showcases the suffering and decay from the experience of his family’s generation working in Korea’s industrialisation era.

Manolo Valdés’ Reina Mariana is just a stone’s throw away from Bond Street. As one of Spain’s most famous living artists, Manolo Valdés finds inspiration from old masterpieces by the likes of Velázquez, Rembrandt or Goya, using them as a pretext for creating a new aesthetic. His work possesses the quality of timelessness, creating connections between the past and present, the old and the new. In Reina Mariana, Valdés re-contextualises Diego Velázquez’s Queen Mariana (1652-1653) – a highly recognisable portrait of the second wife of Felipe IV. The change in morphology and meaning that occurs throughout Valdés’ representations of Velázquez’s image can be seen in this work. 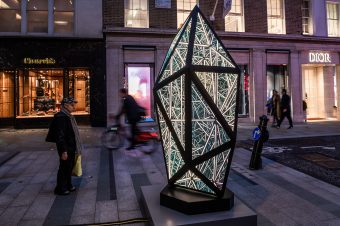 On display beside Bond Street’s Louis Vuitton store is a mesmerising LED glass vitrine Crystal 001 by world-renowned light sculptor Anthony James, implementing the concept of crystallisation, one that is found in nature, and used computer programming to mimic naturally forming polycrystalline shapes. The artist allowed an organic digitisation which parallels crystals formation, even allowing for external influences to cause variations. The sculpture’s multifaceted mirrors, glass and hallucinogenic surfaces allow the public to engage with the work with its meditative and limitless qualities.

Other highlights of the Mayfair Sculpture Trail also include Antony Gormley’s ‘Cinch’ perched on the north façade of Burlington Arcade and Henry Moore’s ‘Time-Life Screen’ above Hermès – what was Time Life Building – also on New Bond Street.

The Mayfair Sculpture Trail is a collaboration with Westminster City Council and Art in Mayfair, and in partnership with Burlington Arcade, Cork Street Galleries, Wander Art, Grosvenor Britain & Ireland, and Art of London. It has been created with the enormous support of the galleries (Opera Gallery, Carpenters Workshop Gallery, Gazelli Art House, JD Malat Gallery, Waddington Custot, The Mayor Gallery + Gormley’s Fine Art, and Timothy Taylor) and their artists, in partnership with which we are delighted to present the artworks which follow. 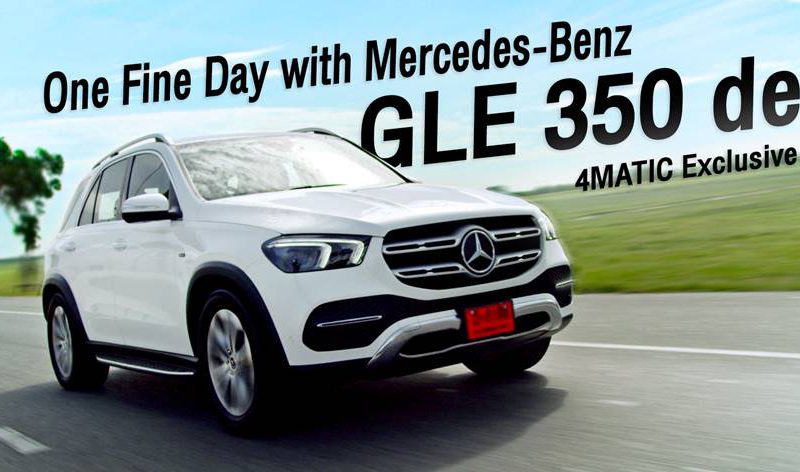 The new stylish experience in the COVID-19 pandemic era with Drive-Thru services could still enhance the elite lifestyle in one’s own car where eating shopping and safety leisure are possible at fingers snap. Innovative and convenient, the travelling is assured with the Charging Station of W Hotel Bangkok where a private lounge awaits you to savour a cup of coffee over the city view. Online Shopping is also made simple with “Central Personal Shopper” by Central. Dial 1425 and your personal shoppers are ready to present you with special services as if you were roaming around doing the shopping by yourself. Afterwards, your purchase could be picked up at Central Drive Thru spot. “Benjarong Thai Restaurant Baan Dusit Thani” provides freshly scrumptious meals delivered by the premium “White Glove Delivery by Silver Voyage Club” service so you could sit back and relax throughout your journey in the 7-seater Large Full-Size SUV, the leader in the debut diesel plug-in hybrid technology in Thailand. Environmentally friendly, Mercedes-Benz GLE 350 de 4MATIC Exclusive is distinguished with the Multibeam LED that could be adjusted according to the traffic.Imbue the route around Suvarnabhumi Airport, one of the most photogenic spots in Bangkok, with the 4MATIC system that conveys soft and comfortable drive in every driving scenario. In addition, the AIRMATIC system allows you to connect to the Media Display screen at ease, ensuring your day off is enhanced and safe in every genre. https://www.youtube.com/watch?v=dr5PUjbJK64 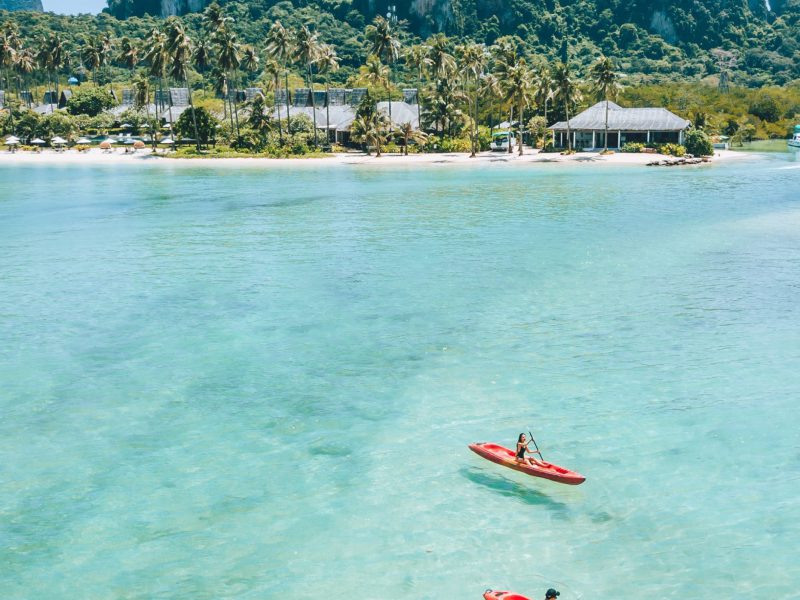 Under the latest 'Phuket Sandbox 7+7 Extension', enabling fully vaccinated travellers from across the globe to reduce mandatory stay in Phuket to 7 days before spending another 7 nights in the appointed areas outside Phuket, S Hotels and Resorts has launched alluring packages to unwind at 3 beautiful SHA+ properties on 3 paradise islands. '1 trip 2 sensations: Phuket+Phi Phi' - Lovers and families can enjoy 7 days at SAii Laguna Phuket before embarking on a short, complimentary boat ride to spend 7 peaceful night at SAii Phi Phi Island Village with daily breakfast for 2, complimentary romantic dinners, eco-friendly marine activities, 25% off on F&B and laundry, free meals for kids, and more, starting from THB 47,000 nett for 14 nights. To book: click here. '1 trip 2 sensations: Phuket+Samui' - International sojourners can spend 7 blissful nights at SAii Laguna Phuket and then 7 more luxurious nights at Santiburi Koh Samui with complimentary lunch or dinner, 25% discount on F&B and laundry, daily afternoon tea, a spa treatment, water sports, and many more, starting from THB 55,000 nett for 14 nights. To book: click here. Both offers are valid for bookings and stays from now and until 23 December 2021, and guests can enjoy the convenience of a one-stop reservation service. Simply book with SAii Laguna Phuket and their expert team will handle everything for the entire two-week, twin-centre stay. To learn more about S Hotels & Resorts, please visit www.shotelsresorts.com. 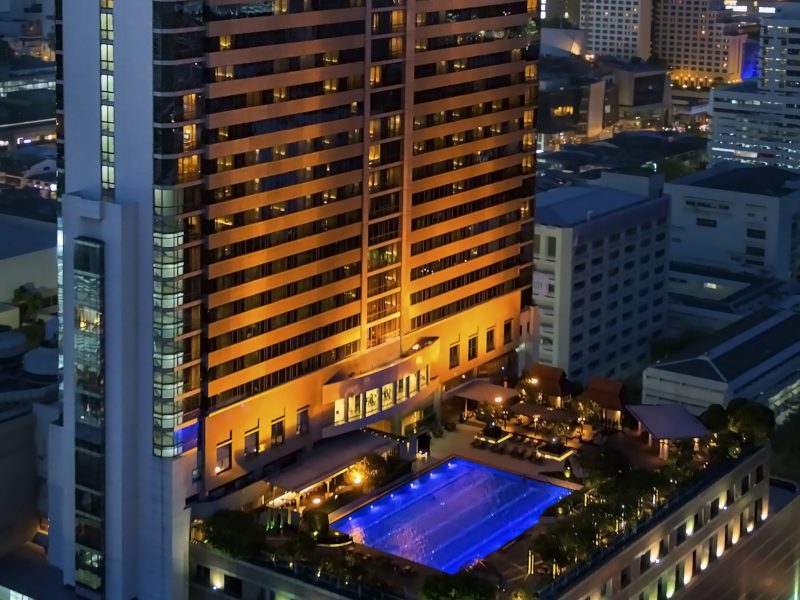 For those who seek a valuable staycation deal, five-star Pathumwan Princess Hotel is now offering a special promotion for Thai citizens and long-term expats for their stay in one of Bangkok's best spots. Rooms start from THB 1,200 nett (THB 1,600 nett with breakfast) and benefits include: Guaranteed early check-in from 10:00 and late check-out until 15:00 Every suite booking will come with a complimentary 60 minute Thai Massage for 1 person at Bangkok Spa (reservation required) 20% discount on food at all restaurants (except Ping’s and Tatsumi restaurants) 20% discount on hotel's laundry service Complimentary Super High Speed WiFi 30+Mbps Free cancelation up to 24 hours before arrival date The Thai Resident Promotion can be booked for stays from now until 31 March 2022. For inquiries and reservation, please call +66 (0) 2216 3700 or visit www.pprincess.com