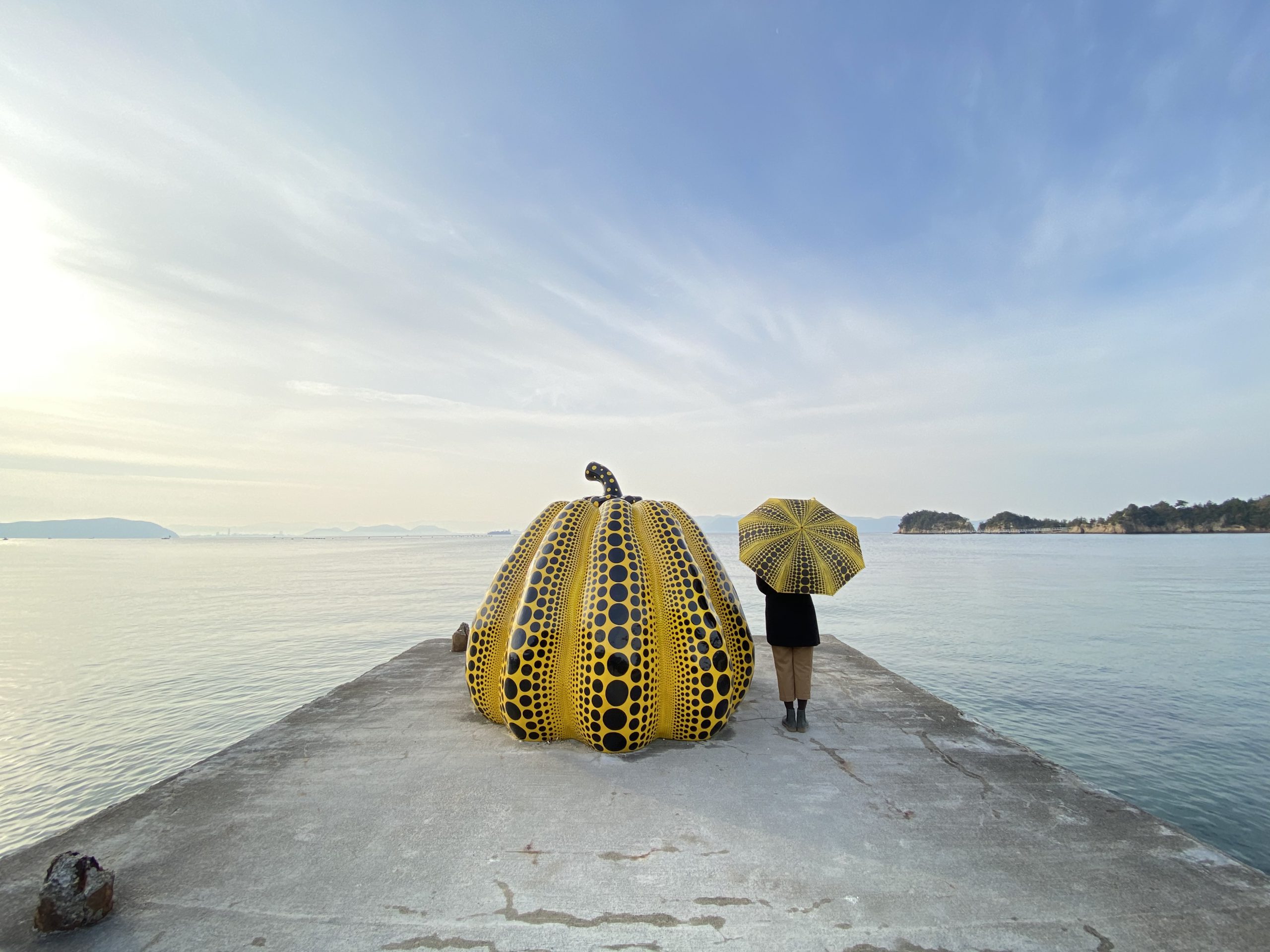 There is something enthralling about Naoshima, a tiny island in Seto Inland Sea with a population of around 3,000. Naoshima Island in Japan has been globally recognised for its collection of remarkable art installations, sculptures, museums and architecture spaces blended in magnificent island nature and calm sea waters. Take a stroll and hop on Yayoi Kusuma’s dotted pumpkin bus to explore a number of surreal art sites dotted around the island. 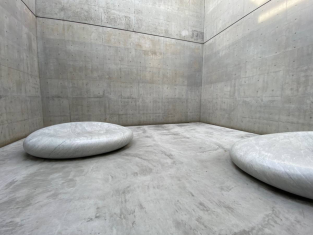 Designed by Tadao Ando, a renowned Japanese architect and Pritzker Prize-winner, Benesse House Museum is a museum with lodging facilities. The first museum marked the inception of art projects on the island. The buildings, unified with the geography in respect of the scenery, are an art on their own and equally impressive as the series of on-site contemporary artworks and exhibits.

The Tadao Ando-design museum showcases Claude Monet’s Water Lily paintings and artworks by James Turrell and Walter De Maria. Expect the unexpected ways of stupefying art exhibits. Despite the subterranean structure of the buildings, the museum plays with rays of natural light that change the appearance of the artworks and the ambience through the passage of time throughout the day and seasons. You will be immersed in a not-to-be-missed sensory experience by joining a sunset session ofJames Turrell’s spectacular Open Sky installation. 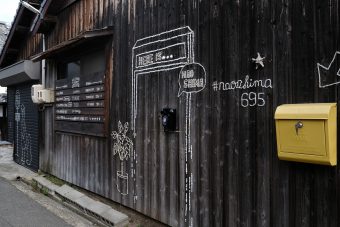 Weaving rich history and contemporary art, Art House Project turns traditional feudal houses and sites into art spaces exhibiting specially created artworks by contemporary artists. Meander around Honmura district, the cultural and historic centre of the island to discover seven Art House locations scattered across the area. Be amazed with your own eyes by the presence of light from James Turrell’s Back Side of the Moon prominently displayed at Minamidera. 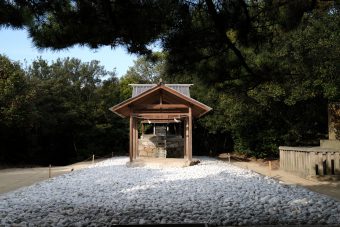 Located in Honmura district, Ando Museum infuses the new perspective by combining wooden, concrete, light and dark elements, bringing out an ever-changing aspect every moment as sunlight and shadow orchestrate, along with displays detailing Ando’s impressive projects and the series of buildings on Naoshima. 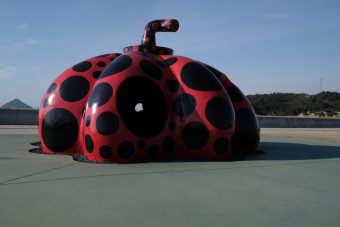 Among outdoor art installations around the island, the two Pumpkins by Yayoi Kusuma – one of the most acclaimed Japanese Pop Art artists of all time, have become the icon of Naoshima Island. Upon arriving at Miyanoura Port by ferry, you will be greeted by the Red Pumpkin just a few steps from the terminal, whereas the Yellow Pumpkin awaits for Insta-worthy photos on the pier near Benesse House. A short walk from the Red Pumpkin lies Naoshima Pavillion by Sou Fujimoto – a geometric structure perched on shoreline. This immersive seven-metre polyhedron made of white stainless steel mesh allows visitors to enter inside its angular frame making it ideal for another enviable photo-taking spot. 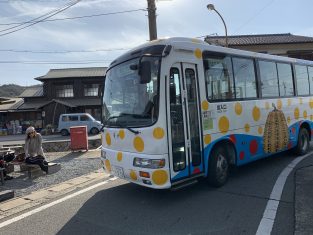 HOW TO GET TO NAOSHIMA

From Okayama, take a JR Uno Line from Okayama Station to Uno Station. Across the street from Uno Station is the ferry terminal from where ferries depart frequently for Miyanoura Port on Naoshima and less frequently to Honmura Port on the opposite side of the island. The ferry terminal at Miyanoura Port serves as the information centre, transportation hub of the island and a souvenir shop. It also provides coin lockers and bicycle rentals.

Cycling is a pleasant way to explore the island despite some hills. Bicycles and car rental are available near the Miyanoura ferry terminal. Alternatively, Naoshima Pumpkin buses run between Miyanoura, Honmura, and the Benesse Art Site area in the south once or twice an hour.

Text and Photos by Rosalyn Sayswang 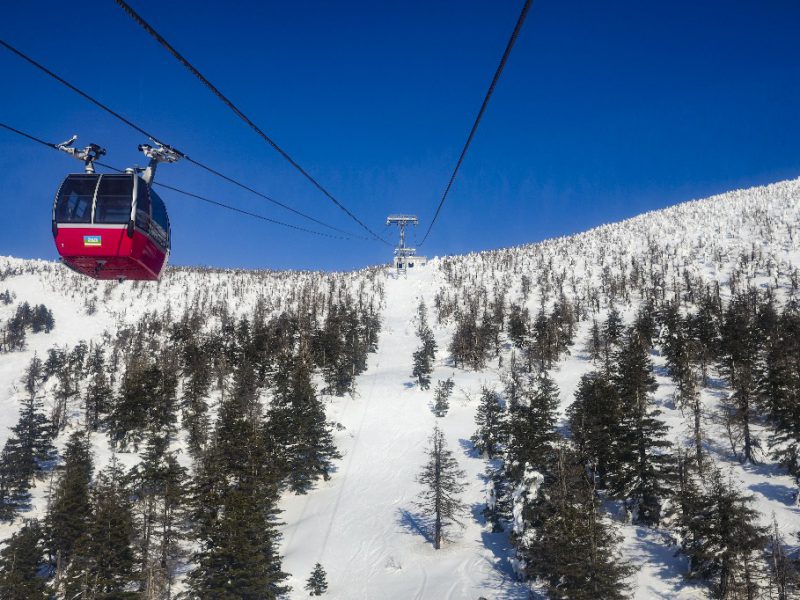 Travellers rejoice! THAI Airways launched its newest Japan route to Sendai, beginning on 29th October 2019. This is a golden opportunity for travellers from Bangkok to widen their Japan horizons without having to worry about taking yet another domestic flight or another hour-long train journey to reach this new favourite destination. Located in the central area of Tohoku, 350 kilometers North of Tokyo on Honshu Island, Sendai is one of Japan’s many historical cities, with marvelous scenery and warm climate. With over one million population, Sendai is the centre of the Tohoku Region’s politics and economics, yet embroidered with many beautiful natural features. It is thus known as a modern city in harmony with nature. One of the most outstanding example is the Hirose River, which runs through the city’s central area together with many zelkova trees, beautifully placed along the streets. The lush green painted roads and parks of Sendai, also known as ‘The City of Trees’ can welcome you during any time of the year, the peak season being autumn when the foliage paints the city golden. You can enjoy Sendai’s pleasant climate all year round especially during the autumn and winter while going out to inspect the city’s many wonderful nature sites. For instance, in Matsushima, travellers come to admire its gorgeous Matsushima Bay on a cruise while feeding the seagulls. And to indulge your photography needs, you can visit the Sendai Castle Site and Aoba Castle, which offer panoramic views of this charming city. Date Masamune, who built the Aoba castle 400 years ago, is honoured with a statue right in front of the castle overlooking the city itself. Sendai may be known as the political and economic centre of Northeastern Japan. The city also embraces the nation’s history and culture. It is home to several Japanese traditional onsens and shrines. To explore the region’s intriguing cultural sites, Zuihoden and Osaki Hachimangu shrines are the great options to start with. To this date, many traditional events are held periodically so as to conserve the region’s unique culture, such as the Sendai Tanabata Festival, music-related events like the Sendai International Music Competition and the Johzenji Street Jazz Festival and many fascinating theatrical performances that attracts both locals and tourists from all over the world. THAI Airways is proud to present to you the ultimate comfort of direct roundtrip flights to this irresistible city as one of our several Japan routes to support the increasing demands for convenient access to more parts of Japan. As THAI’s seventh destination in Japan, roundtrip flights of Bangkok - Sendai will start on 29th October 2019, three flights per week, utilising Boeing 777-200 aircraft with 30 seats in Royal Silk Class and 279 seats in Economy Class. The flight schedules are as shown below. For further information, reservations, and ticketing, please visit thaiairways.com, or call the THAI Contact Center at Tel. 02-356-1111 (24 hours a day). 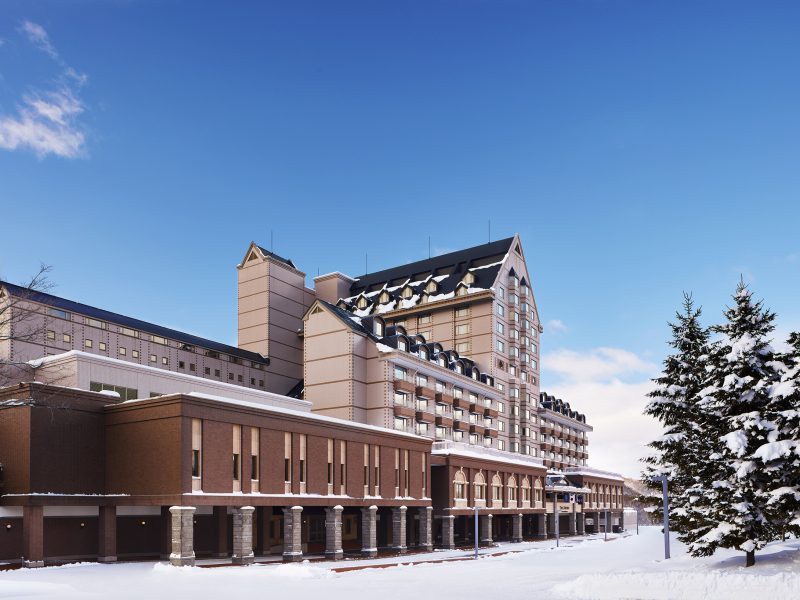 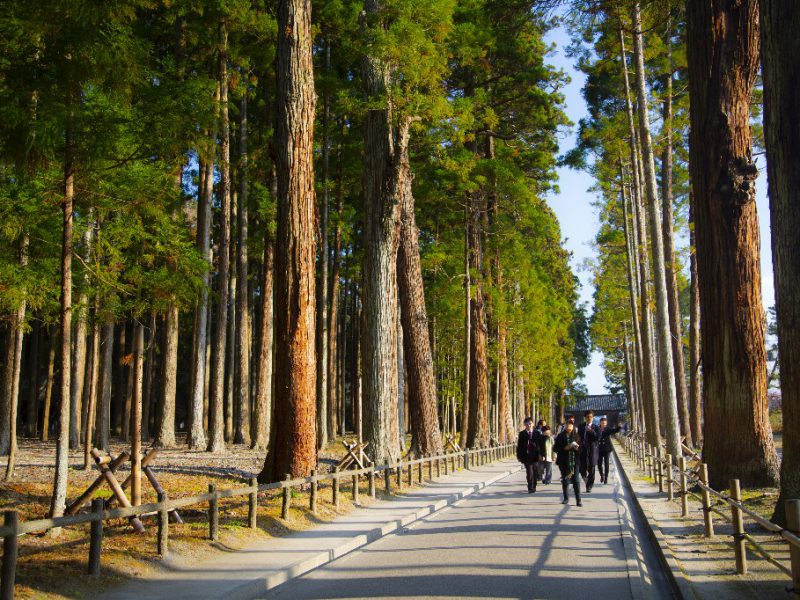 Thai Airways International Public Company Limited (THAI) will launch new roundtrip flights between Bangkok and Sendai, with service to begin on 29 October 2019. Sendai, one of Japan’s historical cities, is located in the center of Tohoku region. Located 300 kilometers Northeast from Tokyo on Honshu Island, Sendai is blessed with its perfect scenery and warm climate. Sendai is the capital of Miyagi Prefecture, and is situated 350 kilometers north of Tokyo. Sendai has a population of one million, and is the political and economic center of Japan’s Tohoku (northeast) Region. Although Sendai is a large city, it is known throughout Japan as a modern city in harmony with nature. The city possesses beautiful scenery, such as the Hirose River that runs through central Sendai, and the lush zelkova trees that line its streets. Greenery is especially abundant in the center of the city, which has tree-lined streets and parks. Sendai, also known as the City of Trees, is beautiful year-round, especially in autumn during the change of seasons. The seasonal climate in Sendai is pleasant and enjoyable, especially the falling leaves in the autumn and snowfall views in the winter.  Sendai is also known for its beautiful nature sites, such as Matsushima that has one of three of the best sightseeing views in Japan.  In Matsushima, one can take a cruise around Matsushima Bay and feed the seagulls.  For a view of Sendai, there is the Sendai Castle Site or Aoba Castle for a panoramic view of the city.  As well, there is a statue of Date Masamune riding on a horse, who built the caste 400 years ago. Despite being the political center and economic hub of Northeastern Japan, tourists may seek peace at onsens, Zuihoden, Osaki Hachimangu Shrine, and many other shrines. In addition, Gyutan is a Sendai must-try menu. Sendai also values history and culture. Many traditional events such as the Sendai Tanabata Festival continue to this day. The Sendai International Music Competition and the Johzenji Street Jazz Festival are also held in the city, along with many theatrical performances. Tourists may choose to fly in comfort with THAI on flights to all regions of Japan. THAI is pleased to serve Sendai and fly to all regions in Japan, as well as support increasing demand for travel to more parts of Japan.  Sendai is THAI’s seventh destination in Japan. Beginning 29 October 2019, THAI will operate roundtrip flights from Bangkok-Sendai at three flights per week, utilizing Boeing 777-200 aircraft with 30 seats in Royal Silk Class and 279 seats in Economy Class.  The flight schedule is as follows: Bangkok-Sendai Roundtrip Flight Schedule Route Flight Number Days Time Departure Arrival Bangkok-Sendai TG 626 Tuesday, Thursday, Saturday 23.59 hours 7.40 hours (next day) Sendai-Bangkok TG 627 Wednesday, Friday, Sunday 11.15 hours 16.05 hours For further information, reservations, and ticketing, please visit thaiairways.com, or call the THAI Contact Center at Tel. 02-356-1111 (24 hours a day)